My receptionist Ericka was in tears. The caller had said some pretty mean things, and she’s sensitive to what people say to her. She thrust the phone towards me, and pleaded for me to deal with it, “She doesn’t understand we don’t have any appointments available and, anyway, we’ll be closed in 45 minutes.” Some lady’s dog hadn’t “eated” in 4 days, and so she thinks she’s really pretty sick, and what was I gonna do about it? On such a hectic afternoon, I was glad to take the load off the front desk, and proceeded with the best defense being a good offense. “So he hasn’t eaten in 4 days? Wow, you rushed right in! What makes you think it’s serious now” The colloquialism of her words and accents made it difficult to understand, even for a small town Missoura hick like myself, but I did make out something about not having much money, something about only having a hunnert dollas. Knowing it sounded like a major medical workup, our lab equipment had an hour back log of tests waiting, and it had been a really long day already, I told her that I could see her at 9:15 the next day. My technician Jenny cringed, knowing full well that I had no openings, even for something minor, at 9:15 tomorrow, or anytime, all day. She also thought the front staff might not be very happy when I had allowed someone so rude and disrespectful, accusing them of not caring, to come in when they had been telling good, regular, polite clients that we were booked until next week. I had a funny feeling about this one. I knew this woman’s dog was pretty sick, and a “hunnert dollas” wouldn’t even get her in the front door of the emergency clinic tonight. I hoped it would wait. And that it wasn’t too serious to throw my schedule into seizures tomorrow.

Frankly, I forgot about her until the next morning, when I walked into the exam room. My flippant attitude about her apparent lack of concern for “Baby Girl” quickly dissipated. The “homeless person” stench was overpowering and was immediately telling as to why the visit had been postponed. This poor 12 year old dog couldn’t even lift her head. Indeed, she had not eaten in 5 days now, but was drinking lots of water. “She’s not spayed,” Jenny whispered to me, in case I missed the obvious. We both knew what it was from the history. A pyometra is an infected uterus, life threatening, and one of the important reasons why a female dog or cat should be spayed if she won’t be used for breeding. I’ll spare you the details, but it is typically fatal before five days, from internal rupture, much like a child’s appendix can rupture, spreading bacterial poison and toxins throughout the body.

The pre-surgical workup of confirmatory lab tests and X-Rays alone is about $300, and if it was a pyometra, could easily exceed $1200-1500. And the patient could die, regardless of our best efforts, especially if the uterus had already ruptured. She hadn’t come in because she had been scraping together, begging, and borrowing to get some money together to get her dog fixed.

Nor could I promise her that her little dog would live through the surgery. “So what are you telling me?” the woman shouted at me, with tears in her eyes. Deep down, I knew she had been rejected before, a lifetime of it. I knew she expected me to say to go away, that if she had no money she wasn’t welcome here.

I told her I wanted to run some tests, and that it would cost her “a hunnert dollas.” That wouldn’t fix anything, but we needed to know what was wrong.

Jenny was correct. The test confirmed a high white blood cell count (indicating infection), and the radiographs (X-Rays) confirmed a huge swelling in the area where the uterus would be.

As I delivered the news and the grave prognosis, her eyes reddened and became teary.

Having pets is a commitment. And an obligation. And owning pets is a choice that involves responsibilities and expenses. Therefore, keeping a pet is not a right, nor is it the grocery store’s obligation to feed the dog for free, nor the veterinarian’s obligation to care for it for free. Pets, like people, should have a basic minimum of care: annual examinations, inoculations, and other preventative health care, and the planning for the possibility/likelihood that something may go wrong – an accident or an illness.

So, are people living in poverty allowed to have pets? If she can share what she finds in the dumpster with her only friend in the world, or if she and her cat split a can of food, is that “good enough?”

As I spoke with my staff, receptionists, as well as technicians, I told them that this woman was not rude. The astonished looks of disagreement on their faces faded as I explained. “You can’t be rude if you don’t know what rude is. She doesn’t fit our picture of how we should behave or talk, but she’s not intending to be disrespectful or unappreciative. She just doesn’t know any better. She’s never had anyone give her the benefit of the doubt. How many times had she been excluded as a child, or looked down upon as an adult? How do you expect her to behave?”

I’ve mentioned in previous posts how high a value I place on the “human-animal bond.” That unconditional love thing is impossible to put a price tag on. Of course this dog is suffering now, but what about the past decade of loving relationship? Do you honestly think this dog’s life didn’t live a happier, worthier life for having met this woman instead of starvation on the street, or the animal shelter’s needle? As Pope Francis said in different circumstances, “Who am I to judge?”

“I can only promise you two things,” I told her solemnly. “I’ll do my very best to save your dog, and she most definitely will die without the surgery.” I was emphatic, because she needed to really understand how sick her little friend was. “Baby Girl” couldn’t lift her head, but her eyes followed my every move and she wagged her tail when I scratched behind her ears.

I told her that we had all discussed it and that we were willing to do surgery during our lunch break, and that it would only cost her the “hunnert dollas.” I’ve learned over the years that even if you work pro-bono that the client must contribute something, to take ownership, and to feel the value – something about pride, that they had contributed also.

I don’t take any credit. And I honestly do not write this story to look like some kind of a hero. My staff clocked out over the lunch hour and also donated their time. We’re all confronted with choices in life where we can make others’ journey’s better, or at least less miserable. I know pain, and anguish. We all do. We have a choice to be angry at God or whomever for allowing/causing crap to happen, or we can rise up from the ashes and be better for our losses. Is it to better to be bitter and angry, or realize what suffering feels like, and gain empathy?

“Really? No one’s ever done anything nice for me before,” this smelly woman wailed and wanted to hug me, so I embraced the leper. If you’re skeptical, of course this may seem disingenuous, and I do get it, I’m from Missouri (this is the origin of “show-me”). We are constantly barraged with cardboard signs on the off-ramps. Are any of them really willing to work for food? At the end of the day, does it make any difference? “I was hungry and you gave me to eat.”

It’s easy to puff your chest out when you do something difficult. But this wasn’t difficult. If I’m not there that day to fix the torn ACL knee ligament, the liver shunt, the heart defect, the broken hip … someone else would have. I’m truly not particularly intelligent or even very talented. But I sleep well tonight, knowing that no-one would have done this simple surgery for this indigent woman. This was truly no big deal, a very simple surgery that took just a few minutes. But after so many years, these opportunities to make a difference, make it all worth while.

I usually ask for comments, but not on this one. Please don’t leave any comments. Like it if you want, and share it. If you like this story, pay it forward. You think your life sucks? Look around. Make a difference. This isn’t even a story worth telling if you don’t use it yourself and think about it tomorrow as you look around. This story would have remained untold if I hadn’t had a couple of beers and like to write. Your life is charmed and blessed BECAUSE you are reading this, are capable of thinking about the big picture, and can make a difference. It’s not the big things we do that are heroic.

At the end of the day, this woman ran in, frantic about her dog. She didn’t have a phone so had no idea if her dog made it through surgery. Certainly, she thought the worst when she was escorted into the room, and told the doctor would be with her shortly … she stomped and shouted and cried for some answer, “How is my dog?!! PLEASE dear God, please somebody just tell me, did ‘Baby Girl’ die?!!” I ran from the appointment I was with when I heard the commotion, but Jenny beat me there. All I heard was, “She’s alive?!!! She’s alive?!! Oh dear God, praise dear God! My Baby Girl’s ALIVE!!!”

I’m sure they heard the shouting and crying next door.

Pay it forward. Much Love. 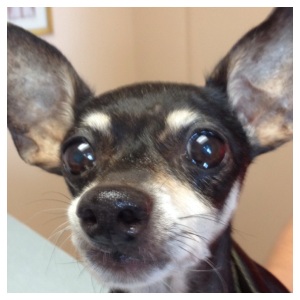