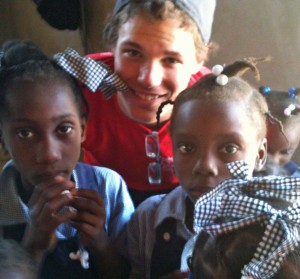 Yesterday was Pentecost, which will always remind me of this story:
The next morning found us walking a hot dusty road to the school that served the entire area. Hundreds of children wore blue plaid uniforms that were crisp and clean. Amazing. They take great pride, we were told, in sending their children to school clean and well put together, as a form of family pride. The children were all over us, but especially Noah and Cullen. I doubt they had ever seen white children before, and everyone wanted to hold hands and touch their strait hair. We arrived as they were beginning religion class, and were asked if we wanted to read to them out of our bibles; Pastor Beau and Kirby would interpret, line at a time. I was a bit embarrassed to realize that I didn’t know an appropriate passage to look up and read. I remembered the time Jesus was inundated with children, and the disciples were upset with them, sending them away, to which Jesus replied, “Let the children come.” How I wished I could remember where that was, because it seemed so appropriate now, as we were each about 50 deep with these beautiful children. So I blindly opened the book, initially disappointed to not have the Holy Spirit guide me to that very verse. Beau was interpreting each phrase, with the animation that would have looked like he was using sign language.

Soon my voice cracked as I read aloud the passage that I had turned to, Mark 9:36

36 And he took a child, and put him in the midst of them; and taking him in his arms, he said to them, 37 “Whoever receives one such child in my name receives me; and whoever receives me, receives not me but him who sent me.”

Not exactly the verse I was looking for, but even better – I’m pretty sure my opening the book here was no accident. (By the way the “Let the little children come” verse was actually amazingly close to where I had opened to (Mark 10:13)

Life is sometimes funny, and humility is so much more beautiful than pride.

I turned from my exuberant group, all jumping up and down and shouting for me to notice them, to the other side of the room to tell Cullen what a cool “coincidence” it was for me to “find” that verse, and I was stunned. Cullen’s group were all silent, staring intently at him, captivated by something. I moved through dozens of children to get closer. Instead of interpreting every his every line, Kirby was standing staring at Cullen also. I have no idea what verses he was reading, but one thing was clear. My son was reading out of his English bible, but the words that came out of his mouth were in Haitian Creole. My eyes then met Kirby’s, as we both mouthed the same word, “Wow.”

From then on I got it. I’ll never be the same.

(This is a shortened repost of a two part Recollection from last year of time spent on mission in Haiti. For the full version, click here).

One thought on “Pentecost with Cullen – Speaking in Tongues in Haiti”