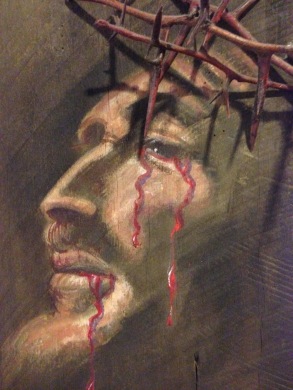 The distinct possibility that Jesus of Nazareth was unaware of exactly how things would turn out is particularly moving to me. This vision of the “fully-human” side of Jesus (as opposed to His “fully-divine” side) requires significant effort, but on Good Friday feels particularly powerful.  Take an Ignation journey with me and see Gethsemane through His human eyes, where He only knows that His heavenly father has asked Him to trust in Him, and willingly encounter this evening.

OK, with apologies to Aquinas (who was pretty convinced that Jesus was omniscient from birth, and understood the entire plan – that he would not actually die but had eternal life), think about a little different theology.  There’s no way to really know for sure, but the fact that He wept, sweated blood, and asked that His father pass “the cup” from Him would imply that He was, at least a little, unsure or at least unclear how this would all play out. Perhaps He was as surprised on Easter morning as Mary was…

One of the professors in my master’s program, a Jesuit named Fr. Michael Cooper, led us through this “low Christology” journey.  How much more faith, love, and obedience would it have required for Him to say “yes” to the whole crucifixion dolorosa if He knew none of this.  Imagine Jesus blown away by the transfiguration, His ability to change water to wine, multiply loaves, and walk on water.  Humor me this contemplation: close your eyes as Jesus and imagine the loneliness, anxiety, and desperation of knowing your father has asked you give the ultimate gift, and you are just to trust him, that all will work out.  How much more of an ultimate gift would that have been, to embrace such suffering and agony depicted by Gibson and in our minds without full knowledge of the third day.

There’s a story about a five year old boy and his eight year old sister, who both contracted a disease and became very sick. The boy’s immune system was able to develop antibodies to overcome the disease, but his sister did not. She was not expected to live even another day.

The doctor who had been treating her sat the little boy down and explained the grave situation to him, asking kindly if he’d be willing to give his antibody rich blood to his sister. To the doctor’s surprise, the boy seemed to hesitate.

The boy looked down at the floor and his thoughts seemed very far away. It was some time before he snapped out of it, then he took a deep breath and said

After hearing this the doctor and nurses wasted no time and immediately got the blood transfusion procedure going.

With wide eyes the boy lay in the hospital bed next to all the machinery and watched as his red blood flowed through the tubes, out of his body.

Later on he watched as his sister in the bed next to him received the blood, and he could plainly see that the color was returning to her cheeks where before they’d been so pale. He smiled at her, but seemed so distant and sad.

The doctor was brimming with joy and hope for the little girl, but before he could give the boy and his parents the good news, the boy turned and asked in a whisper, “Will I die right away?”

On hearing that, the doctor almost dropped the clipboard he was holding.

You see, the little boy thought that agreeing to the blood transfusion meant that he had to give all of his blood to save his sister’s life.

Did Jesus of Nazareth agree to all the suffering and humiliation of being stripped naked and literally beaten to death out of love for us and obedience to His father with out full knowledge of Easter morning?

There’s something about the contrite silence when leaving Good Friday services that has always hit me hard.  The tabernacle is empty, the holy water fonts are dry, and we all leave in the sober silence of leaving the theater after our first viewing of The Passion of Christ so many years ago.  We avoided eye contact from the horror of modern day massacre, but also grief, guilt, and responsibility.

But also in relief that we have a God who knows suffering. Who knows the pain of losing a son. Who walks with us daily as we carry our own crosses.  But why does this make our own suffering any easier – to know that the Creator of the universe knows us personally and has cried our tears of grief?  I don’t know why, but it does.

The five years seems like a lifetime since I walked the Camino de Santiago as part of my own grief journey after losing my son. There were so many amazing “coincidences” during that month, where I would find myself walking with someone who had a message in their own story that I desperately needed to hear, or whom needed to hear my own story.  One amazing story involved standing in the morning darkness of a foggy bathroom mirror in a hostel with a towel around my waist shaving, when I was joined by another perigrino in this “chance” encounter.  We had never met, but I soon realized that I had walked for about an hour with his nephew a few days earlier; he had lost his son in an accident a year previously and of the hundreds of thousands of hikers on the Camino in 2013, our paths had crossed “coincidentally.”  It was on that day that I first encountered another father who knew my pain and suffering.  We only spoke for a few minutes, but that was all we needed.  With our shared tears we knew each other in unspoken ways.

It is difficult to explain why this was pivotal, but in retrospect, it was.  Soon I would witness my own transformation: No longer did I want to share the tragedy of my cross to bring everyone I could down with my miserable, broken life.  Easter morning had brought redemption and joy and resurrection.  It was still such a heartbreaking story, but one with new purpose, a lost life had brought forth so much light from the ashes.

Eagerly embrace your own Easter morning.  You don’t walk alone.