As the dreaded 17th of May, our darkest day, draws near, I’ve been asked multiple times where this year will take me. My friends and clients just seem to know that the middle of May will find me on a sabbatical, of sorts.  In 2013 I hiked west from St. John Pied de Port, France to Santiago, Spain, the infamous Camino de Santiago.  This pilgrimage was depicted in the Martin Sheen movie called The Way, which my son Cullen and I watched the day before he would leave us forever.

2014 again found me at St. John Pied de Port, but last year I walked east to Lourdes.  This famous shrine, where the Virgin Mary appeared to Bernadette proved most fitting.  Who could know my grief more than the mother of Jesus after having lost her own son?

These are pretty clearly aligned with my journey and my faith, but why on Earth would I travel to one of the least Christian countries on the planet?  How could this piece possibly fit into the puzzle called my life?  Why would Fez be relevant to Cullen, my family, or my faith, on this journey that I often refer to as my “Camino?”

The year before he went to China, Cullen participated in another international study semester in order to garner the credit hours necessary for a “minor” degree in Arabic.  This would accompany his minor in French, and dual majors, in Spanish and Chinese.  Bear in mind, this was at age 19. William Cullen Klein would graduate from Florida State University in two years with four degrees, after finishing high school in two years, concurrently completing his AA through dual enrollment.

Although FSU did not have an official class placed in Morocco that Summer semester, Cullen fearlessly agreed to go it alone.  He was driven to get the credit hours only this trip would provide, so he would graduate with his four degrees, on the rushed schedule he had so carefully crafted.  But why was he in such a hurry? It was as if he knew his own timeline. 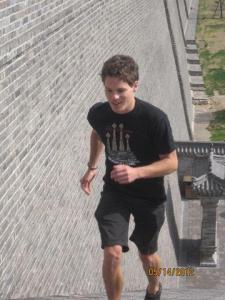 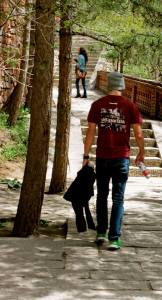 Sorry, but when I start talking about my son, I just seem to go on and on and on.  And so, since I never tire of doing that, let’s do it some more.  This is an excerpt from my CRHP weekend retreat witness:

I loved my daughters more than life itself, but a man wants a son… On my own 34th birthday, William Cullen Klein was born.

(originally about 30 more minutes of my bragging about him here, and then:)

Adolescence was upon us and so was fear, confusion, and anger. This, of course, was manifest as rebellion. Good times and kind words were a distant memory.  The ball games, camp-outs, and fishing trips, dozens of concerts together, tossing the ball in the back yard, and even getting our Tae Kwan Do black-belts together – these were all a lifetime ago.  He hated me, my values, my Church, my house.

His unfortunate every other weekend with us served up dinners together with my new wife and two additional siblings, a midnight curfew, breath check, and of course, mandatory Sunday church.

I realized that much of his behavior and emotions were from confusion and anxiety over those issues I’ve written about previously.

For years, I would kneel and beg God to remove his heavy burden. I prayed constantly, and made all sorts of offers, if Jesus would just show some of that compassion that I had heard so much about and make my son “normal.”

But I tried so hard for him to realize I didn’t reject him. I loved him so very much and I wanted him to know that it was truly unconditional. And I was so scared for him.

So, about the time Cullen turned 17, I stopped begging for God to make him “normal,” and being angry at Him for being so cruel.  I began to recognize that I have a big God. A huge God that I could never begin to comprehend. A magnificent, omnipotent God who had made no mistakes, and is in control.

And so I started to simply pray for Cullen. That Jesus would meet him where he was. He had made Cullen the way he was for a reason, and that he was an incredible person, so smart and so beautiful, inside and out. And so I prayed that the creator of the universe would reach out and embrace my son

He loves him. He understands him. Through Christ, He IS the personification of love. And so, I prayed simply that they find each other. That God’s will be done.

Cullen spent the summer after his sophomore year studying on an exchange program in Morocco. I warned him about “you know what” before he left, and in that culture, well… I emphasized how much I loved him and wanted him back alive. He rolled his eyes, but knew both of those things were true. I prayed for him daily at Mass.

I was shocked at how God answered my prayers as soon as I changed the context of my prayers. I was amazed at the son that returned from Morocco.  Had his orientation changed?  Of course not, but it no longer mattered.  They had met.

“Dad, I looked out from the airplane in Barcelona, and you’ll never believe how glad I was to see a cross at the top of a church. He said every person, every day tried to convince him that Islam was the only way to God.  And so he kneeled with them in prayer several times each day. (They just didn’t know he was praying silently those prayers that he once found boring and pointless.)

My new Cullen wanted to go to Mass with us; he even had us pick him when he spent weekends at his mother’s. He went to adoration of the Eucharist, and truly knelt in prayer for hours. Not only had “they met,” Cullen has a relationship with the creator of the Universe that I will forever be in awe of.  We’d stay up late discussing God, and Scripture, and theology. I reminded him that the word disciple means “learner,” not blind follower. Dig deep and learn about the real, historic Jesus, his teachings and how and why He loves us.”

So now, my dear friends, you see why Morocco is calling to me.

Cullen had a persona that was magnetic, and so even though he had no Florida classmates on the Fez University campus, he was adopted by new friends from Chicago.  I had no knowledge of this until Katie approached me after Cullen’s accident.  She and Victoria, and so many other kind loving beautiful kids from DePaul University reached out to my son and made him part of their own group. 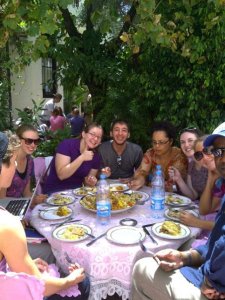 Cullen had told me that he made friends with some classmates, and how funny it was, because he enjoyed talking with that upper-midwest, Chicago, almost Sarah Palin accent.  When he talked that way he had us laughing so hard we cried at the dinner table.  We still do, and although we’re not laughing so hard, they’re still very fond memories.

Morocco is the most religious country in the world.  99% of the country claims to be Sunni Muslim, the small remainder are Sufi Muslim, with about 360,000 Catholics, 50,000 Protestants, and 8,000 Jews.  Morocco is, in fact, the most Western of the African Muslim nations, both geographically and politically.  Religious diversity is allowed and encouraged, although it is still a capital crime for a citizen to convert away from Islam.

Katie and Victoria have planned quite an itinerary for me.  They’ve prepared a few phrases to learn (which I have on flashcards in my pocket), a history of the culture and relevant current events, and contacted a host family for me to stay with.  They’ve even arranged a guide for me to translate and take me to the University in Fez and places where they went with Cullen.

Unfortunately he was so fluent in Arabic and French that he was the only student placed in a family that spoke no English, so I’ll not be staying with them.  However, stopping to break bread with that family will undoubtedly be one of the first stops my “guided tour.”

We don’t really appreciate what we have and hold dearest until we feel a life without.  And so perhaps that’s why my son rediscovered his Christian faith in one of the world’s least Christian places.  I have no doubt that’s a device our Lord used as he relentlessly knocked on the door of his heart.  I imagine the intensity turning to a fist pounding on that door when the muezzin chanted the adhan, the Muslim call to prayer, five times each day, until he opened it. 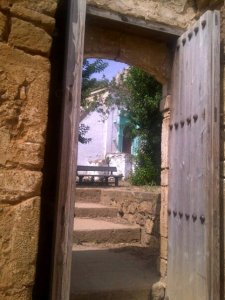 “Be like men who are waiting for their master when he returns from the wedding feast, so that they may immediately open the door to him when he comes and knocks. (Luke 12:36)

And this will be consolation I hold dearest, deep in my own heart.    I have so much to be thankful for.

Please keep me in your prayers – 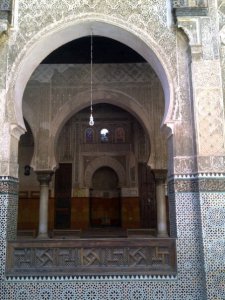