The 12 year old boy stood alone, looking around frantically, unable to think clearly. Why had he ever asked for this? He had begged and pleaded to be trusted with such a big responsibility, and after 3 years had finally been given that opportunity.  How could this have happened?

“Big Red” was an old Snapper riding mower that only Johnny Byford was allowed to operate.  He had been Dr. Sam’s “vet assistant” and the general fix-it and maintenance-man around the animal hospital property for over ten years.  Today he’d be going out to help Dr. Sam work 800 head of cattle, and so the property maintenance would be postponed for a day or two.

Billy had wanted to be an animal doctor for as long as he remembered.  He had begged for years to have a dog, but the pleas were always met with a resounding, “No, it would just too big of a responsibility for the entire family (translation: you’re a pretty irresponsible kid, so grow up a little).”  When Billy’s big sister had gotten a kitten for Christmas from her boyfriend, that broke the ice.  Within 6 months, his persistence had paid off, and Billy had his first dog, “Pooch,” the ugliest, most pitiful, miserable little wretch anyone had ever seen.  Even then, life was fleeting and ever so precious.  Within six months of “Noelle” dying from feline leukemia, Pooch was found poisoned in a neighbor’s yard.  And so a steady progression of relationships with the small-town veterinarian were born, as Roger, Wolfie, Sam, Sean and Mandy became successive members of the family.

Having thus become acquainted with Dr. Sam, as the dorkie little kid with the ever-present “wow” big eyed look behind his wire glasses, Billy finally got up the nerve.  He asked if he could volunteer sometimes out at the clinic, “Just to help clean up and stuff.”  Hair thinning at the top, even at 30, Sam looked down, “How old are you young man?  When you get to be about 10, I’ll put you to work!” (This was well before minimum age requirements, or at least before they were really enforced).  Sam thought for sure this would be a few years off, and by then the silly little kid would have long since moved on to washing dishes, or mowing lawns.

“Great,” Billy almost shouted, I’ll be ten this summer!  August 27th!”  Johnny looked at the scrawny little brat and laughed, relieved that it was at least 4 months off.

August 27th of 1969 fell on a Wednesday, and Billy was sitting on the front steps when Jackie the receptionist arrived, without a clue as to the importance of the date.

Billy was mainly a bothersome pest that just wouldn’t go away, everywhere at once, always asking questions, and basically a pain in the ass.  But Sam was a “stand-up” man, and they had a deal.  Besides, Sam didn’t have any children yet, and Billy was growing on him.  The weeks turned into months, and weekends turned into summers.  He really wasn’t allowed to do much in front of the clients, but he gave most of the baths, walked the dogs, scooped the litter-boxes, and kept the runs free of feces.  This was the perfect job.  Except he knew he really wasn’t allowed to do anything important, anything of real responsibility.  That would soon change.

Billy used the push mower around the edges and behind the clinic, watching with envy as Johnny got to ride the big riding mower and do the “real” lawn work.  How he longed to do something that cool – when nobody was watching, he’d sit on the mower in the barn and shift the gears.  Such was the innocent stuff of little boy’s fantasies in 1971 Sikeston, Missouri.  Billy’s imagination was startled as he clipped a rock with the rotary blade and sent it hurtling across against the metal building.  Johnny’s head turned, and Billy sighed to see him laugh at his carelessness.

Dr. Sam bounded out the side door with his arms filled with syringe guns, castrating instruments, blood tubes, and rolls of cotton.  As he walked towards his Bowie Vet Truck, he motioned to the boy to come over.  “Dr. Sam needed to talk to me!  Maybe he’s gonna take me with him to work the cattle!  I’ll be such a big help!” his mind racing as quickly as his little legs.  “Johnny and I won’t be back before quittin’ time, so when you’re finished mowing, just go in to see if Jackie needs anything before you leave for the day.”

“Yessir,” he replied as he turned and hung his head, walking back towards the push mower, kicking the ground.  If not for the approaching shadow, he would have walked right into ol’ Johnny, rushing towards the truck after putting Big Red up for the day.  That would have been really funny to them.

The next morning Billy had to ride his 10 speed Schwinn the 3 miles to work, because his Mom was teaching a remedial summer class, his daddy was at the farm, and siblings were all busy.  He arrived just to see Dr. Sam and Johnny cleaning up the instruments from working on a limping bull, and he braced for admonishment for being a few minutes late.  But Doc simply said, “After you get the kennels cleaned, Billy, I need you for something big.”  He looked up to see a serious face, but Johnny was behind him smiling.

As the boy scrubbed the dried feces off of the concrete kennel floor, he couldn’t help but imagine, “Is today the day he’ll actually get to do something big?”  As Billy squeezed  the floors dry, the idea fell apart as Dr. Sam said they’d be leaving soon to finish at the feedlot where they had been yesterday.

“Since you’re pretty much finished up here, come on out and let Johnny show you how to run Big Red.  This grass is gettin’ mighty tall an’ it really shouldn’t wait another day.”

Billy’s heart was bursting with excitement, but he did his best to look unmoved, answering matter-of-factly, “Sure Doc, that shouldn’t be a problem.”  Johnny rolled his eyes, because he knew this was a big deal for the little brat.

Johnny had actually already showed him what everything was, and how it worked , many times, in anticipation of this glorious event.  Johnny made a point to let Billy know that it was his suggestion yesterday, as they pulled out of the clinic parking lot, that he thought he could be trusted with the big mower.  So within about 4 minutes, Billy had mounted the trusty steed, and was doing “manly work.”

What everyone but Billy knew, was that Big Red was a rust bucket.  This thing was over twenty years old, and always breaking down, throwing a belt, or getting overheated.  Nuts and bolts constantly loosened and fell off, and just last spring, a wheel had fallen off.  But to Billy this was the most responsibility he’d ever been given, much like the little kid in the movie A Christmas Story, summoned by his father to help change the flat tire.  He is entrusted with the hubcap and lug-nuts until he loses his balance, flinging them into the dark, and utters the famous expletive.

Billy puffed his chest out as he had suddenly become a valuable employee, riding the trusty steed on its first lap around the field in front of the barn.  He watched Doc and Johnny loading up the truck for the day.  “When,” he dared wonder, “would he be considered for a day of that – now that’s what he really wanted to do, his life’s mission.”  As he pondered these dreams, basking in the glory of the moment, the tension rod holding tight the belt connecting the engine to the transmission snapped in two.  The belt fell off the camber, and into the path of the blade.  As the mower coasted to a quick halt, the belt wrapped around the blade, quickly chewing it into black rubber pieces, sprayed all over the driveway.

Billy’s head spun around to see the reaction of those who had trusted him.  They hadn’t seen a thing, but were inside getting another load of medical supplies.  He jumped off the machine, frozen in panic.  He wasn’t sure what he had done wrong, but (he thought) nothing like this had ever happened before, and somehow he had screwed up his first real chance to prove himself.  He had begged and pleaded to be trusted with such a big responsibility, and after 3 years had finally been given that opportunity.  And failed.

Billy had no idea what to do, but more than anything, he didn’t want to face them, and just wanted to run.  Dr. Sam was supposed to teach him how to be an animal doctor, and Johnny Byford had trusted him.  He had let them down.  As he raced through the possibilities, he saw his bike leaning against the building, but before he could consider the consequences of racing away, the door opened and out ran the two men.

There was fear and panic, dread and disappointment.  But it was all Billy’s.  The consolation from Dr. Sam’s response would be remembered, valued and put to prose some 40 years later.  There would by no tears, or hugs – these were three grown men.

I looked up to my mentor, my role model, and my friend with tears, I’m sure, in my eyes and said, “I’m sorry.”  Johnny was smiling, probably relieved that his little pal hadn’t been hurt.  Dr. Sam, who’s initial reaction appeared to give me a hard time, suddenly realized this I just a little kid, and this was one of those serious moments where you don’t mess around.  But I anticipated his change in body language was now be one of regret, that I was too little for such a chore.

He squatted down beside me and said, “Billy, this is not your fault.  Even if it was, the only people in this world who never screw any thing up are people who never do anything.  I’m proud of you for wanting to work so hard.  Now help Johnny get this mess cleaned up and put Big Red up ’til tomorrow.  We could use a hand at the feedlot today anyway, so after you’re done here, get you’re boots on and get in the truck.” 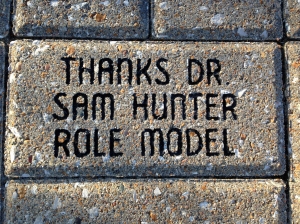