The poor dog should have weighed about 55 or 60 pounds, but was just shy of 40 and looked pitifully up at me with a hesitant tail-tap against the exam table. I could see her ribs, her backbone, and the large mass on her breast. The only thing missing was Sara MacLaughlin singing in the background.

My client and her son had been driving through a “rough” part of Orlando, just off OBT where the “social workers” regularly walk in the evenings. They had just cleaned an office-building and were on the way home when they saw her dodging the early morning traffic.

“Be careful!” she shouted to her son as he darted out the car door to see if she wanted a ride, or if she would run away, or even try to bite when he approached. Apparently he didn’t even need to catch her – when she saw his door open, she swaggered over to him and just paused, too weak to even jump into the car. She sat in his lap as they drove off, incessantly whining and licking his face.

I typically don’t charge for these office calls, I do a cursory exam and relieve suffering, whatever I can do that doesn’t cost me too much. So the exam and check for worms was pro bono – if they could be such Good Samaritans, it was the least I could do. They paid for the heartworm test (negative result was shocking), and the deworming, when I determined she was full of roundworms and hookworms (not shocking).

The son was explaining to his mom that based on the condition and number of scars on this poor dog, she had undoubtedly  been used as a “baiting” dog.  In the lovely parts of our culture where dogfights are popular, dogs such as this are used as “bait” dogs.  She was very sweet, and as such, certainly wouldn’t be a fighter.  Dogs like this would be thrown into the practice ring to be destroyed by the others, developing their bloodlust.  I was horrified when I parted her gums to discover that, indeed, her canine teeth had been filed off flat, to render her unable to defend herself or injure one of the valued champion fighters.  He was probably right – she had indeed been a bait dog, and somehow escaped to the streets.

We always run the microchip scanner on new adult and found pets, and (this is a surprise) – She HAS a microchip!

You can imagine my mixed emotions when the the reader displayed an identification number.  This pet was brought in by someone willing to step up and take care of this poor, abused, suffering creature, but historically, I’ve always done my best to contact the registered owner.

But sometimes there is no registered owner, or current address.  When someone has me chip their pet, I am EMPHATIC that they immediately call the chip registry and do this.  A chip is just a number, and is completely worthless if it doesn’t point back to the owner.

And such was the case.  We called the chip registry who could only inform us that this numbers was one of a lot provided to the Veterinary Clinic at Ft. Bragg, in North Carolina.  This dog had belonged to one of our soldiers!

As our nation’s birthday celebration neared, this story was beginning to take on an air that nobody could have imagined.  My finger trembled a bit as I called the army base clinic number I had found on the internet.  The rollercoaster paused as the staff-sergeant explained that this soldier had only come in once, in 2010, and they didn’t even know if he was active duty anymore.  They only showed vaccinations, a microchip ID, and that her name was, “Angel.”

There were so many possibilities.  Had the dog been lost or stolen, and used in fighting, while he was stationed somewhere else?  Is he in Afghanistan or Iraq?  Had he been injured or killed?

Or was she lost and roaming the streets at all?  Could she have just been on the street next to the house she thinks is home?  All soldiers aren’t heroes.  Did he even lose this dog?  Worse yet, is he involved in dog fighting?  How could we even know?  Michael Vick seemed respectable enough before that evidence came out.

I do tend to give people the benefit of the doubt.  Besides, her name was “Angel,” and it would make a beautiful reunion if he had lost her.  As horrified and nauseous as I was at the alternative possibility, I pursued some connections.  I had filled in for a year as a civilian Air Force Veterinarian at Patrick AFB and knew a few people, so I called to see if someone there could locate him and reach out. 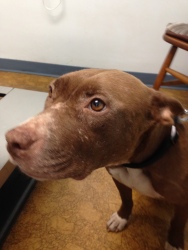 Angel and her foster family left me that day so anxious and curious, I was a bit disappointed that we wouldn’t be working on the 4th, and so had to wait.

On the fifth of July, my friends on the base called back with the news.  I could never have anticipated what I would discover over the next few weeks.