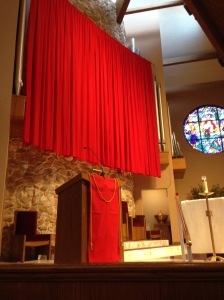 It’s always startling to look up from the pews and not see the image of Christ up behind the altar.  Many churches place a veil there during Holy Week, or even the entire 40 days of Lent, to aid in our Lenten journey of “doing without.” Apparently this is an ancient custom, another tradition packed with meaning and symbolism.  It arose during the earliest times, reminiscent of the Jewish temple curtain, “torn in half,” at the moment of Jesus’ self-sacrifice. (Mt 27:50-51); (Mk 15,38); (Lk 23,45).

My German brothers I met on the Camino call this veil the Fastentuch, or “fasting cloth.”

Everything in the Church has meaning – everything we do, everything we say, every object and every action.  They either are truth, or they represent/remind us of scripture, or a calling to reverence for our Lord.  This is the essence of the “tradition” that is so confusing to those looking in, and mis-represented by so many “leaders” outside of the Church to their respective congregations.

From “crossing ourselves” to a Crucifix on the wall.  From Holy Water to statues.  From memorized prayers and a liturgical form of worship to vestments worn by the ordained.  Even if your own faith tradition doesn’t understand the relevance or scriptural basis for “traditions” such as these, certainly you can see the beauty in provoking a deeper atmosphere of prayer and reverence.

So anyway, the inner curtain of the Jewish temple separated  the inner sanctum, the Holy of Holies, from all of us.

And so, this tearing open of the curtain with the death of Jesus opens up access to the inner sanctum, and we now may enter into our own relationships with Him.

The Lenten Veil separates the community from that image of Jesus we grow so familiar with, and tend to take for granted.  There are many places where any display of this symbol representing the very heart of our faith are forbidden, and actually subject to severe punishment.  When we look up and see the Cross of Jesus gone, it pulls viscerally, and creates a longing.  It symbolizes an emptiness of life without our faith, without Jesus.  We are truly alone, and life has lost all of its meaning.

This is a form of physical penance, of fasting.  The vernacular term “starving” thus refers not only to material poverty, but to a spiritual nakedness of facing life alone, the futility of suffering for no reason.  Again, life loses all of its meaning.

Wikipedia affirms it in its German edition:

The somber custom is believed to come from a 9th century German practice of extending a large cloth called the “Hungertuch” (hunger cloth) before the altar from the beginning of Lent. The cloth – which hid the altar – was not removed until during the reading of the Passion on the Wednesday in Holy Week – at the words, “the veil of the temple was rent in two.”

The building and placement of a fast cloth was – as a religious – with a few exceptions Tradition maintained until the 18th century only in Catholic areas, as Luther against this tradition of religious art pronounced as “Gaukelwerk”. Although they once extended far beyond the original boundaries, they remained after the Reformation obtained only in the formation bidding; occasionally there are still churches that maintain the tradition. However, it appears that the Lenten veil is being rediscovered as an art form, and many Protestant churches now participate in the custom.

And so as we joyously and jubilantly welcomed the Messiah Yeshua into Jerusalem on Palm Sunday, we progress through the most holy of weeks.

We are encouraged to commit to our own sacrifice.  If we’ve never “given up” anything for Lent, or if we’ve failed to keep good on that intent this season, its time to recommit for these last seven days.  Again, it’s not what we sacrifice, its that we sacrifice.  And it’s not for Him, it’s for us.  Some small reminder of what should really be important in our lives.  Something that forces us to pause, to focus, to imagine being without.

Most certainly Jesus knew how the week would end – the suffering of His Passion, the panic and despair of his followers, and their jubilant ecstasy of his victory over death at His Resurrection.  As we remember and desperately miss our beloved family and friends who have departed, we take much consolation in the confidence that our Lord has torn open that curtain, embracing them as they enter to the other side.